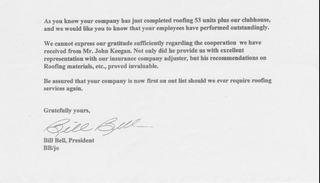 As you know your company has just completed roofing 53 units plus our club house, and we would like you to know your installers have performed outstandingly. We cannot express our gratitude sufficiently regarding the cooperation we have received from Mr. John Keegan. Not only did he provide us excellent representation with our insurance company adjuster, but his recommendation on roofing materials, etc., provided invaluable.  Be assured that your company is now first on our list should we ever require roofing services again!
Cinnamon Cove of Flowery Branch, GA
Sunday, February 7th
Good Morning,   First I would like to say as a QA manager I may be more picky than most.  I've also had enough experience with construction to understand the difference between bad work, good work and the rarely seen excellent work.  That I know that the visual aspect of the finished product is not the most important part of the product. Let me say that not only were the employees of your company personable, polite and pleasant to work with but they were obviously skilled with a fine eye to detail.  The finished job I have is not only visibly pleasing but I feel that they have done the rarely seen Excellent work.  Will I recommend your company to others, YES and already have.
Theresa A. of Buford, GA
Tuesday, July 26th
SCALE FROM 1-4   1. Contractor Knowledge - Housworth Roofing & Construction was knowledgeable and helpful regarding my project. 4 2. Professional & Organized - Housworth Roofing & Construction is organized and professional. 4 3. Communication - The staff at Housworth Roofing & Construction communicates with me effectively. 4 4. Installation Crew - The Housworth Roofing & Construction installation crew was organized and professional. 3 5. Quality Of Materials - I am satisfied with the quality of materials used. 4 6. Quality Of Workmanship - I am satisfied with the quality of the workmanship. 4 7. Clean & Safe - The job site is kept clean and safe. 4 8. Work Done Right - My work was done right the first time. 4 9. Problem Resolution - The staff at Housworth Roofing & Construction addresses and resolves problems effectively. 3 10. Schedule - Housworth Roofing & Construction adhered to our agreed upon schedule. 4 11. Appointments & Meetings - Housworth Roofing & Construction showed up on time for appointments and meetings. 4 12. Value Received - I feel I received a fair value for my money. 4 13. Likely To Recommend - I am likely to recommend Housworth Roofing & Construction to a friend. 4   Area Of Satisfaction - In what area(s) were you most satisfied with your experience with Housworth Roofing & Construction and why? I was most satisfied with the complete roof.   Recognize Excellence - Is there anyone at Housworth Roofing & Construction you would like to recognize for their exceptional service? Eric Goldberg and Dustin Rivers provided me with exceptional service.
Robin C. of Cumming, GA
Tuesday, July 26th
Hi Laila   Please pass this along.  I was very impressed with John.  He was on time and did a fine job appraising the condition of the roof this morning.  Please thank John for the great job.  You are lucky to have such a fine employee being the public face of Housworth.   Regards   Jim Weck
Jim W. of Jasper, GA
Wednesday, June 28th
Eric Goldberg was great! He was always keeping in constant contact and ensuring everything was completed to my satisfaction. The majority of my neighbors had used Housworth and everyone I talked to was more than satisfied with the work performed. Each neighbor had nothing but the highest praise for Housworth
Sachin D. of Johns Creek, GA
Monday, July 4th
I wanted to commend your team, especially Eric, on the work on our roof this week.  I’m not just saying that b/c Eric is our friend, but I am really impressed with your company and the whole process and wanted to let you know.  After reaching out to multiple contractors, besides our usual roofers (Dr. Roof), Eric was the only one who showed up and followed through on an estimate.  He was punctual for every appointment with the insurance adjuster, followed up on the progress many times, and came over multiple times to help us make the decision on shingles and colors.  He even drove by some other houses in our neighborhood, per my request, to look at their shingles to help us make decisions.  Eric kept us informed of schedules and sent updates/photos during the actual project.  Eric thought of the smallest details to help us and make this process completely seamless for us (for example, he suggested we remove artwork from the walls in case the vibration causes anything to fall, and even offered to come over and help us with that; he also reminded us to not park in the garage in case the dumpster was delivered early).  His crew was also punctual and worked incredibly fast.  They were thorough and paid close attention to details, especially the clean-up.  Things were delivered and picked up on time, and we are just very happy with the whole project and can’t wait to get started on painting.
Lana S. of Marietta, GA
Monday, October 26th 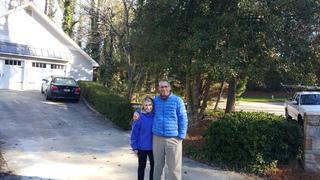 John was instrumental in coordinating, from start to finish, our home improvement project. His knowledge and fortitude allowed for a smooth installation process. We gladly recommend John Keegan and Housworth Construction to friends and family.
Ben S. of Atlanta, GA
Wednesday, January 6th
I am Super pleased with Housworth the work that Housworth did for us during the month of December 2015 and would give them my highest possible recommendation.I contacted several firms for some help in getting a somewhat large home repair job done and Housworth was the only one who felt like they were up to the job ... and returned my queries and phone calls for estimates. (I did get visits from two other companies but they were reluctant to do the project.) So many companies don't even return queries ... even over Kudzu or "trust dale" or "yelp" ... (thats frustrating!) But Im glad Housworth responded to my calls.Richard Anderson was the project manager for our work (and it turns out, one of Housworth's owners). I found Richard to be personable, helpful and responsive to further questions and queries. We have a one level, "ranch"-style home that we have been in since the early '90s and is typical for the type of homes built in suburban Atlanta in the early '80s. We had the roof "redone" several years ago (by the much reviled "AtLroof" shysters that hit and damaged the roofing market in metro Atlanta a while back), but there has been a window on a vaulted part of the ceiling that is not a skylight, but high enough to be such, that has been cracked (by a bird? hail?) for months, to top it off, the exterior flashing and woodwork around the window needed substantial repair and during the rains of October 2015, it began to leak substantially. The entire window "area" needed to be "remodeled" with new glass and woodwork. Richard arrived and assessed the damage and unlike the firms who only gave me a cursory "we don't fix this kind of stuff" quote, Richard was actually able to show me the damage on top of the roof.How did Richard show me the damage? Well, I had an accident in 2014 and I certainly was not going to be getting on a ladder, but Richard had the latest technology on hand! He brought along a flying drone and guided it up to the roof to take photos and videos of the area that needed to be repair. I was able to see (and obtain) actual photos of the damage that truly showed what needed to be done aside from the fact I knew we had a leak. Due to the way the window was constructed, almost "resting" on the roof, Richard pointed out it was a problem waiting to happen as leaves and rainwater would collect in the area around the window. Richard gave us a great suggestion in having the bottom of window size reduced and raised up from the roof to allow less of the valley the original construction provided.The photos also depicted that the exterior siding of our home's small chimney was in equal disrepair.After getting, and okaying, a quote from Richard and Housworth, Richard got together a team consisting of skilled carpenters, painters, siding and drywall guys plus arranging for a glass company to cut glass to the new size. It took a couple weeks to get the window issue and chimney completed ... it was a lot of work ... but the end result was excellent. We definitely plan to use Housworth for future work on our home.
Ray B. of Norcross, GA
Wednesday, April 19th
Total testimonials : 8

We serve the following areas